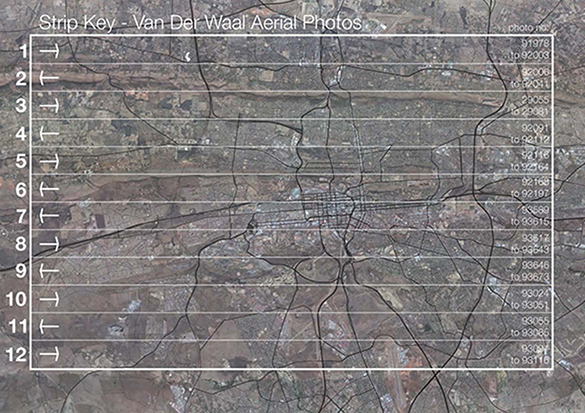 This collection of aerial photographs was digitised from hardcopies contained the of the University of Pretoria’s Van Der Waal Collection. The photographs are of the Pretoria region and were taken between October of 1947 and February of 1948. The collection contains 12 sets of photographs, each set containing a strip of sequential images. The photos cover the majority of Pretoria’s urban areas, stretching from Pretoria North to Waterkloof and from Atteridgeville to Lynnwood Manor.

-The sets are numbered from 1-12, each set is a strip of photos taken in sequence from east to west or west to east. Set number 1 is the northernmost strip and set number 12 the furthest south.

-The naming of the file is structured as follows: Strip number – Sequence number (Photo number).

-A key map has been created to indicate the approximate position of each strip as well as the flight (sequence) direction. Access the key map here