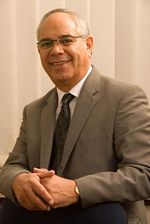 Peter Thuynsma graduated from the University of Zambia (UNZA) in 1970 with a BA (Education). After a short stint teaching at the David Kaunda Technical High School in Lusaka, he joined his UNZA mentor, the acclaimed writer and Nobel nominee, Esk’ia Mphahlele , who had left UNZA for the University of Denver. There, under Mphahlele’s tutelage, he completed his MA and PhD in African and Comparative Literature.

Thuynsma taught at the University of Denver, and at Loretto Heights College in the USA. On returning to South Africa after an 18-year exile, he taught at the (now) Walter Sisulu University, and moved to the University of the Witwatersrand where he succeeded Mphahlele as Professor and Head of Department. He later joined the Wits University executive management team as Special Advisor to the Vice Chancellor. He has published widely, enjoyed sabbaticals at Rutgers University’s English Department and SUNY Binghamton — the latter with Ali Mazrui’s Institute for Global Cultural Studies — and presented several conference papers and public addresses locally and overseas.

He has also been listed on the UN Roster of Experts for Human Rights Education.

More pertinently, Peter Thuynsma recently managed a 5-year capacity-building grant from the Kresge Foundation to establish a fully-fledged fundraising office at the University of Pretoria.

The selected publications listed here represent Thuynsma’s study of Es’kia Mphahlele’s works along with a few others that may help the student of African Literature to develop something of a comparative context within which to critically appreciate Mphahlele’ s corpus.